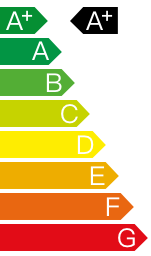 ¹The stated figures have been calculated using the legally required measurement techniques. Previously, consumption figures were measured using the New European Driving Cycle (NEDC). Since 1 September 2017, certain new vehicles have been given type approval in accordance with the Worldwide Harmonised Light Vehicles Test Procedure, WLTP). Compared with NEDC, WLTP represents a more realistic procedure for measuring electricity consumption. As of 1 September 2018, NEDC is gradually being replaced by WLTP. The electricity consumption figures measured using WLTP are, in many cases, higher than those measured using NEDC, which is attributable to the more realistic test conditions associated with WLTP.

We are currently legally obliged to state the NEDC figures. In respect of new vehicles that have already been granted type approval in accordance with WLTP, the NEDC figures are derived from the WLTP figures. Until it becomes mandatory, the statement of the WLTP figures is made voluntarily. NECD values, which are given as a range, do not form part of the offer, as they do not relate to a specific vehicle. They serve solely to facilitate comparison between different vehicle types. Aerodynamics, weight and rolling resistance may change due to optional extras and accessories and have the ability – just like personal driving style and weather/traffic conditions – to influence the electricity consumption and on-road performance of a vehicle. In terms of electric vehicles, in particular, higher or even significantly lower consumption figures may be recorded in real-life conditions.

For more information on the official electricity consumption of new passenger cars, please refer to the Guide on the Fuel Economy, CO2 Emissions and Power Consumption of New Passenger Car Models, which is available free of charge at all outlets, from DAT Deutsche Automobil Treuhand GmbH, Hellmuth-Hirth-Str. 1, 73760 Ostfildern, Germany, or at www.datgroup.com